It is that time of the Year.

It is that time of the year when the world for me is bought back into sharp focus. It is the time when I remember what was and what might have been.

Of course for those of you who have not seen my sons story you have no idea what I am talking about. So I thought on the third anniversary of the life changing even I thought that it was about to time to really record this and maybe put a layout or two in to illustrate things a little more. You will have to excuse my rambling though.

Anyway, on with the story. I really sit here with tears welling in my eyes.

On 22 February 2006 DH and I took our son Hayden, 3 1/4 years old, into Bandar Seri Begawan Hospital, that's in Brunei, as he had had a case of vomiting for 7 days. We had taken him to a doctor twice during this week but really he had got worse and certainly no better. It was a gastro bug he had caught. At this stage he had lost a lot of weight, was very shaky when walking and somewhat incoherent when he was speaking.

At at least 20% dehydrated and electrolytes severely out of whack, he was hooked up to IV fluids. He was to spend the night in hospital. Now you have to use your imagination at this stage. Brunei is a developing nation and the hospital system is in a developing stage too. So my night in hospital with Hayden was one on a mattress on the floor. To cut this part of the story short the night involved repeated blood tests, replacement of potassium, sodium and general fluids for hydration. As the night went on Hayden got less responsive and to me it seemed sicker not any better.

In the morning DH and I changed shifts. The decision was made to move Hayden to PICU. No sooner had I made it home and I got a phone call to say that Hayden's heart had stopped beating briefly, he had been resuscitated and was now on a ventilator. Luckily for Hayden a young and newly trained Cardiac Pediatrician was at his bedside when all this took place. Thanks you so much to this Doctor.

After making a few arrangements I somehow drove to the hospital to find my son hooked up to so many machines you cant even begin to image it. It was like a Christmas tree with lights flashing, machines dinging and in general it was a huge stunned moment for me. (Just a moment while I wipe the tears from my eyes.)

Now Hayden was none responsive, had no gross motor skills, no language, ventilated but conscious we think and on what felt like a pharmacy worth of medication. He was medicated for continual fluid loss, electrolytic imbalance, kidney failure, extremely low blood pressure etc etc I wont bore you with the rest.

We had no idea what was going on. Between the continual blood tests and the CT scan we were in the dark. Luckily for us a Kiwi friend, who was also in Brunei, was ICU nurse. She was by our side, asking the great questions for us and generally supporting us. Our friend sat with me for 3 nights while Hayden's life hung in the balance. It was really touch and go. I so appreciate the support given to us at this stage. So Karen if you ever get to read this thank you so much from the bottom of my heart.

After 5 days in PICU we were told by the head of Pediatrics that they had no idea what was wrong with Hayden but said he needed to be taken back to New Zealand when he was stable. By now he was off the ventilator but had his eyelids taped down as they would not shut, his arms secured gently down and still attached to many of the same machines.

Hayden had become a pin cushion. Not a vein was left untapped. Eventually a central line was put in, but bed sores were becoming evident and an IV site had tissued badly.

21 days later with the support of Karen, my sister who is in the medical profession we put Hayden on a commercial flight back to New Zealand where the long pathway to discovering what was wrong with Hayden, his prognosis and rehab. I will leave that part of the story for tomorrow.

I have used this journalling from this blog post on this page. 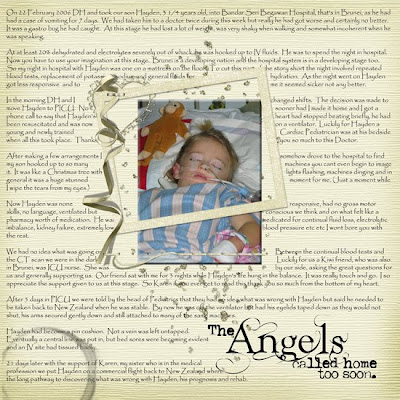 Credits Essence of Cream kit by Lindsay Jane Designs. The font is Papyrus and bush is from Obsidian Dawn.
Posted by Unknown at 19:39 3 comments: