I was sitting thinking about times back in Brunei and an image was bought to mind about DD learning to ride a bike. Why this image came to mind who knows, but I thought it was worth recording.

In Brunei there is a perpetual summer all year. So DH and thought that we were made when we realised that the small, first two wheeler bike DD could comfortably be ridden inside. When I say inside I mean a space about 10m x 10m right in front of air conditioning. We used that space for nothing except to play cricket in with our preschoolers.....yes our house was huge but that is another story.

This particular day DD got the bike which she was so proudly trying to ride pretending Batman was having a go to. I luckily had taken a photo and thought that there was a page to be made. 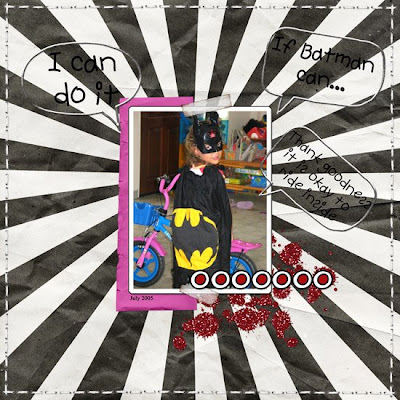 Credits...background paper, speech bubbles from Life365 Hodge Podge 12 kit from WW, stitching from My Favourite Things kit from WW, glitter from Chasnryan by Flerg, mat and strip from Canded Apple by Emily Merrit, tape from Signature Tape pack at WW, fonts are Roman Times and Scrap Kids
Posted by Unknown at 14:57 No comments: Links to this post