I was sitting there the other day looking at photos from time gone by when I came across this fantastic one of my DD at Kindy when we were living in Brunei. 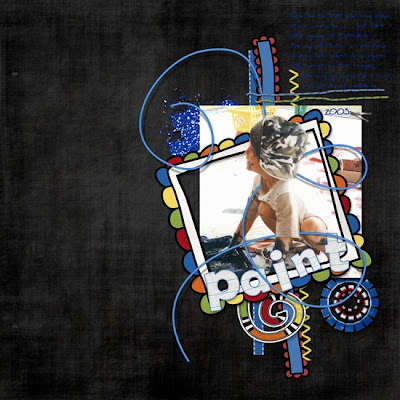 It got me thinking about how adventurous we allow our children to become. What experiences we let them to encounter.

I know that I am keen to see my children play in the mud, I don't mind them getting we in the rain, climb trees, paint, bake etc. My theory is as long as they are safe then anything goes.

Yes it often makes plenty of washing, cleaning and requires many a sticking plaster or two on hand but to see the joy and pleasure when they encounter these experiences it all seems very worth it.
Posted by Unknown at 20:53 No comments:

Email ThisBlogThis!Share to TwitterShare to FacebookShare to Pinterest
Labels: brunei

My DD finished school last week. The year has had its ups and downs what with having to create a brand new circle of friends and facing new challenges requiring choices to be made.

With all of that under her belt I have to say that she has been very inspired by her teacher this year and the effort DD has put in reflected this. So I should not have been surprised when she walked away from the end of year prize giving with a certificate acknowledging this effort for the year. Yet another moment and another child to be proud of. 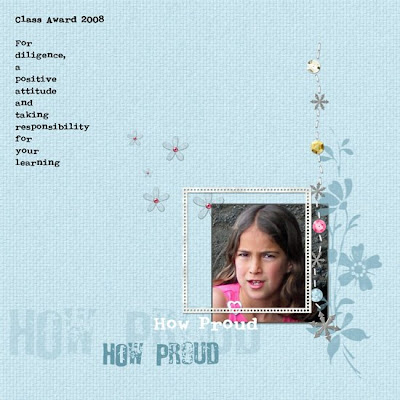 Credits Everything for this LO was from Donna Duncombes Winter Delights, fonts are Depressionist Three and typewriter royale 2000

It did make me sit and wonder what it is that makes me as a parent proud. Is it just the academic successes or something more. I have made a conscious effort this year to discuss the need to make good choices with DD. This has required her to think long and hard about what makes good friends, what constitutes appropriate behaviour, consequences for poor choices and so on. I have sat through the tears, hers not mine this time, the smiles, the sound of pleasure when she achieves and the growing confidence as the year progressed. She has faced all of this and learnt many of life's little lessons. This too makes me proud. I know that she takes a great deal of care with her brothers especially DS1. For this I am proud too.
Posted by Unknown at 23:12 1 comment:

My DS2 graduated from Preschool Friday. He no longer is a big fish among many others but in February will become a very little and new fish in a much larger school setting.

I must say that I was filled with many emotions as I sat there through his little ceremony. He was all dressed in cap and star clustered cape beside his teacher. He showed off his portfolio to the class smiling and received their cheers, songs and hugs.

On the other hand me....I was a mess. I should have taken tissues. I think I surprised myself. My last child, my baby is growing up. He has been through many an emotional journey while at his pre school. This was here he first left the precious place of home to spend time with someone other than me, this is where he expressed his joy at learning and anger at the world around him while his brother was seriously ill in hospital. This was the place he forged friendships and formed special bonds with the adults at the centre after we ripped him dramatically out of his secure life in Brunei to a country he had never visited and didn't know anyone else. This is the place where he started to emulate his brothers behaviour which was far from idea as his brother was recovering from a brain injury and the behaviours were less than ideal to mimicking.

I know I am excited about the future for my son but sad that this little chapter in his life is over. I cried because he is now so independent and come out the end of a very difficult little journey and has done it so well. I makes me smile, with tears, when I see his joy at learning, his keenness to discover the world of numbers and words and his fascination at the world around him.

I guess most of all I cried because I could.

Here is a LO I I created celebrating this moment is DS2 life. 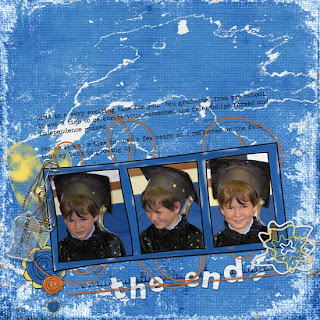 credits kit is art 101 by Lindsay Jane Designs and font is travelling typewriter
Posted by Unknown at 20:18 3 comments:

Email ThisBlogThis!Share to TwitterShare to FacebookShare to Pinterest
Labels: School

Gosh I has been sometime since I have blogged. No excuses really, but I will do my best to try and make some. Life is hectic. DD has just turn 8 and of course with that comes the party and such that newly 8 year olds like. Just a little party was had. The cake made by me then off to the beading place for a beading party. Necklaces was on the agenda and between the selecting the design to be made and the beads to be used, getting the instructions between the chatter chatter chatter that eight year olds can make. It really made me wonder what I am going to be in for when little miss becomes a tween or even a teen. I must make a note to myself that time on the telephone will become difficult for the adults of the house to access. Anyway DD loves the rare treat of going out for lunch. So Mum (me) and eight year olds all went to a cafe for lunch in their party dresses. What a sight. 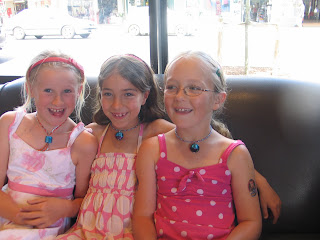 How grown up she is becoming. After dropping the girls off home we were back to see the local Santa Parade.

Sunday just a perfect summers day. So we packed a picnic and ventured out on our first beach trip of the season. Kareotahi was a perfect spot that day. I bravely exposed my pale and somewhat neglected body to the elements, covered it with sunscreen. The para sailers floated over head, families played cricket and flew kites, children were building and digging in the sand and of course swimming. This beach is on the west coast of New Zealand and that makes the sand black and on a hot summers day black sand gets really hot. 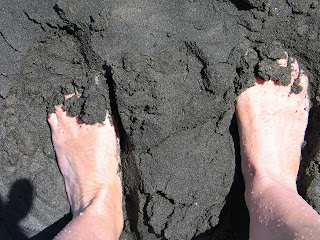 Now don't get excited in thinking I was going to get wet. No... I did not go swimming. In fact I love swimming but the water has to be warm and trust me on Sunday I could not feel my ankles after only about 1 minute so that was it paddling and nothing more.

DD had a fab weekend. She loved everything she did and has started planning next years event. I am not sure if I should be happy that she is a planner and is trying to be organised or pensive that there are still 360 days till her 9th birthday and such a grand event can be planned in that time.

That is just the weekend. There are just 4 more days to write about but I will save that for another post.
Posted by Unknown at 21:47 1 comment:

Well it is the season to be merry...or so the song says. So I thought I would record some of the excitement of the season my children are into this year. 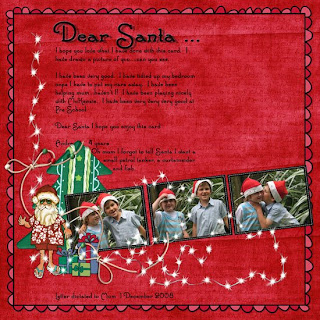 Everything from Once Upon a Christmas by Lili and Emily Merritt from except Summer Santa, fairy lights from Surf Santa Kit by WW Frame from Full of Wonder by WW
Font is Santa Sleigh

The conversation I have recorded was just the tip of the excitement that is rising in our house at the moment. What is it about children and Christmas.

Further to this excitement DS2 is going for his first school visit tomorrow. He will stay until lunchtime and then come home. He will start school officially on the first day of the school year in February 2009. This is the first school day when he is five and legally able to attend school. He is just so excited as he is going to be a big boy. My how time does fly. He is my baby and always will be but I will no longer have a child at home during the days. What will I do with myself?

Well enough prattling about myself.
Posted by Unknown at 15:59 3 comments: