I got thinking about the things that children say to us. Sometimes the funny, sometimes the sharp and sometimes the inquisitive. This all got me thinking about DS2. He has just turned 5 and 2008 had a favourite phrase....But why? Now I know these two words are fairly harmless but have you ever sat in the car with chatty 4 year old whose favourite thing to ask is but why? But why do I need to do it? But why should I? But why .....it can be relentless some days.


As a mother I have tried to think about what questions DS2 is really asking but reality is he really is just asking But Why? Maybe this year will bring a new question involving a few more words. I look forward to blogging about that.

Here is the LO I made all about this. 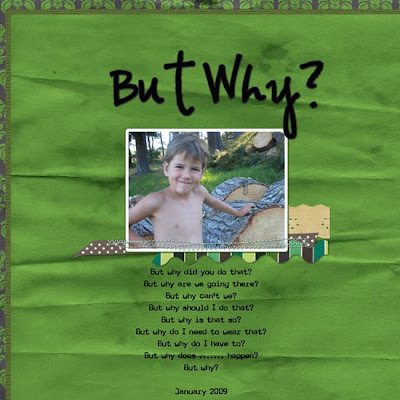 Credits; Resolve Kit by Audrea Neal, Classic Cardstock Neutral by Emily Powers. Fonts are typewriter a602 and Vaguely Repulsive
Posted by Unknown at 22:20 4 comments: Links to this post

Email ThisBlogThis!Share to TwitterShare to FacebookShare to Pinterest
Labels: General

So here I am and back to the story. I should add here that I tell this story not because I spend my days living in the past thinking about what might have been, or even what if... but because I know this story needs to told for my other children.

So here we are in Auckland, New Zealand after a nine hour flight, met by an ambulance on the tarmac and taken directly to Starship Hospital. This is New Zealand primary children's hospital. Thankfully we arrive with detailed discharge notes. Brunei did not have all the facilities that developed nations have at their fingertips but their paperwork was as good as they could do with the resources available to them.

We arrive back and the situation is very unknown. What we do know is that the gastro bug was the stimulus for the system failures that occurred.

Then started the battery of tests on electrolytes, scans on this that and the other part of the anatomy and visits for the widest range of Consultants you can think of. Renal, ophthalmology, orthopedics, cardiology, radiology, neurology, etc etc etc. In fact their were so many I can not remember them all.

Hayden status was still up and down but nothing was life threatening any more. He was, however unable to tolerate liquid food via a nasal gastric tube unless it was partially digested for him. He required physiotherapy for the contractions he had and was still non verbal and had no gross motor skills at all. He had a number of deep bed sores and a very deep wound where the IV had tissued. This looked like it needed plastic surgery. He still had no eyesight.

The kidney condition Renal Tubular Acidosis was suggested in his notes Brunei and was confirmed but the cause of this required blood to be sent to Australia for analysis.

In the mean time the MRI scan came back with stunning results. Hayden's brain had been damaged significantly. It showed a unique pattern and we were told acute atrophy to the brain and the likely outcome for Hayden would be no ability to walk or talk again. How devastating this was. Our baby, who we took to hospital with a gastro bug was never going to recover or even get close to recovering. Life was changed. I don't know at this stage how many boxes of tissues I had used then, but many. Unfortunately DH had had to go back to work and was sitting in Brunei when we got this news. The lovely staff at Starship rang him and Karen our friend the nurse was with him with when he got the news

About the same time Ophthalmology had confirmed Hayden as probably having a condition called Cystinosis. Blood test results latter confirmed this.

By now the list of things wrong with Hayden had become Cystinosis which has a secondary kidney condition, renal tubular acidosis and the brain injury. Cystinosis is an incurable metabolic condition. It can be managed with a very intensive drug regime. It affects the major organs starting with the kidney. It is quite rare.

In the LO below I have tried to show the stages of recovery that took place. Firstly the drugs for Cystinosis are very acidic and caused him a great deal of discomfort and vomiting. This meant he was unable to participate in physiotherapy as he was always feeling unwell.

After two months in Starship Hospital Hayden was moved to Wilson House. It is a center for rehabilitation. He was resident there. Thankfully recovery surpassed the initial end point we were given and his eye site recovered, contractions started to stretch out, he wanted to walk and crawl. He had to learn to eat (remind me about food and Cystinotic people. It is another blog entry all together), etc etc etc. You think of it, it has to be relearnt.

Thankfully Hayden's eyesight made a full recovery. He did remember how to walk and run with no impediments, his ability to eat returned and his speech was slowly returning. He returned home on 19 July 2006

Here is a LO with photos of important moments in Haydens recovery. 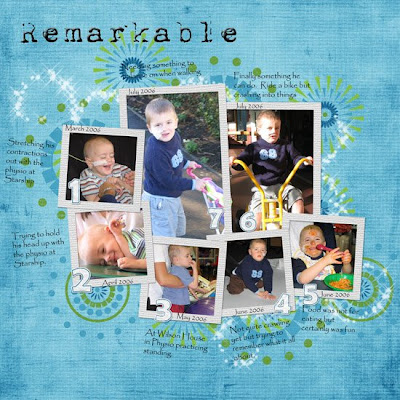 Credits. The kit is Pool Party by Lindsay Jane Designs. Font is Papyrus and Report 1949

Unfortunately we now know he has been left with a good list of things that a wrong with him; cystinosis, renal tubular acidosis, significant cognitive delay, ADHD, speech delay and significant seizures.

His medication supply is plentiful as electrolytes need replacing, an oral drug for cystinosis as well as eye drops, anti seizure medication and medication for ADHD. Nutritional support is given also. Hayden has a mckey button and a port a cath.

Here is the photo of it all 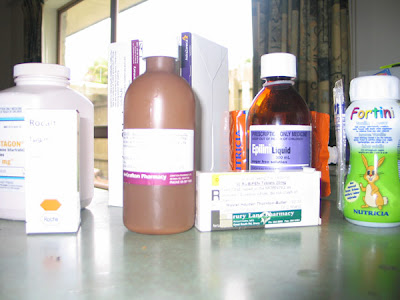 In closing, on the down moments I try and remind myself that there is always someone worse off than me.
Posted by Unknown at 11:50 3 comments: Links to this post