I thought, since I have a more than plentiful supply of grapefruit and lemons, I would have a go at making marmalade.  I can't say that I was filled with confidence about my chance of success but it was worth the effort I thought.

So I found this recipe that did not involve me having to peel the fruit and I was ready to go.  I did a little research to work out how to sterilise the jars in the microwave, which by the way was very easy and hot.

Anyway it is now 10.44 pm and I have just finished cleaning up the bench in the hope to avoid attracting the ant colony that seems to know when the bench is not cleaned properly.  It has taken about 4 hours from fruit recovery to having a clean bench at the end with 8 jars of marmalade on the bench.  It is too soon to tell wether it will set property (the spoon test) told me I should be right for an easy to spread marmalade.

So fingers crossed for a marmalade that can be used on toast not one that acts like a sauce. 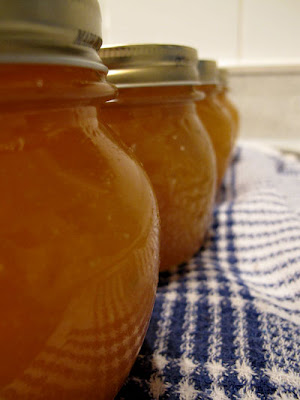